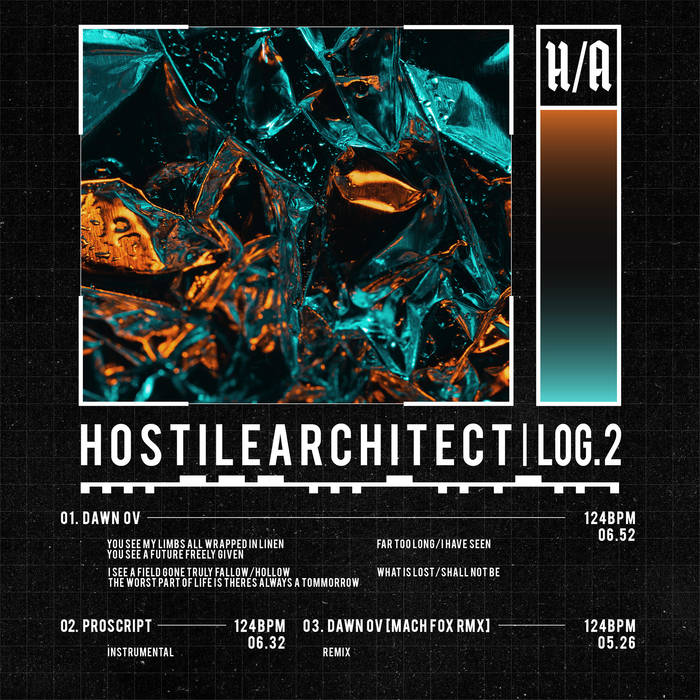 Brutal Resonance Records is proud to announce our partnership with Australian cyberpunk, EBM, and industrial project Hostile Architect. When we first announced that we had openings in the record label, we never expected to receive such a heavy amount of submissions. We filtered through over fifty submissions and had to make a tight call. Hostile Architect was one of the finalists and we are proud to call them part of the Brutal Resonance family.

Production techniques that make clear-cut, machine-shop beats for a neon age where limb replacement surgeries are done in beaten-up, back alley dens, where corporations take rise of military might in the name of profit, and where gangs run rampant on the streets looting and pillaging every piece of tech and hardware they can muster, Hostile Architect's brand new EP "::LOG.2:: DAWN OV" is their finest release to date.

Teasing the release of their forthcoming album, this EP contains two original songs followed by an immeasurable effort from fellow electro-industrial enthusiast Mach Fox. A name that might be familiar to you if you follow Zwaremachine, who was granted the honor of being Brutal Resonance Record's debut release with the "Ripping at the Fabric" EP.

Stand clear and make way for cyberpunk assimilation. The future is now.

Brutal Resonance Records is an industrial and dark electronic outlet focusing on bringing some of our favorite musicians’ and bands' albums and EPs to you. After years of journalism in our beloved underground scene, the next logical step was for us to form a part-time record label. ... more

Bandcamp Daily  your guide to the world of Bandcamp